BroadcastPro ME speaks to Suzan Iravanian and producer Kaveh Farnam about the Iranian film and its path to finding both a domestic audience and an international platform.

Suzan Iravanians feature film Leakage weaves the issues of gender into the troubling centrality of oil in the regions politics. We speak to Suzan and producer Kaveh Farnam about the Iranian film and its path to finding both a domestic audience and an international platform.

In the best tradition of Iranian movies through the years, Leakage, Suzan Iravanians debut feature film, uses the multilayered Farsi language and grammar to address the issue at the heart of the regions politics  oil.

And the question her movie poses is  what if the oil runs out? 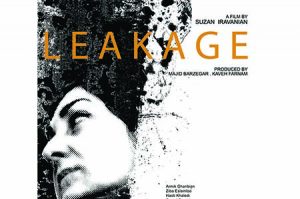 I am a woman with oil coming out of her body and whose husband has disappeared, repeats protagonist Foziye, describing the reason she must emigrate to Germany. The Iran-Czech Republic co-production has been described by one film critic as a high-concept arthouse genre film playing on a number of contemporary social issues such as immigration, the worlds oil obsession and female exploitation. It follows a middle-aged woman whose body produces crude oil, and her quest to emigrate to Germany.

Inspired by a gamut of Iranian filmmakers as well as Argentinas Lucrecia Martel, the New York Film Academy graduate garnered praise from the jury in the Works in Progress category at the Karlovy Vary International Film Festival in the Czech Republic earlier this year. The debut feature film from a relatively unknown filmmaker has reportedly captured the attention of the so-called A-grade film festivals, considered a critical first step for films to find both audiences and a return on investment, and it is currently undergoing additional colour grading before a proposed release later this year.

Suzan Iravanian has a BA in Art and Architecture and an MA in Cult Film from Brunel University, and an MA in Filmmaking from the New York Film Academy. The easiest part of making Leakage for this native of Shiraz was writing the script. She recalls: I initially wrote this story for a short story course in Oxford University. I expanded the story into a script. it was fairly easy  just me, my script and my ideas. Translating the metaphor of oil to celluloid, however, was far from easy. The process began in late 2015 and only now has the film been completed.

Of the difficulties faced, she says: The first difficulty is I live in Shiraz. Tehran is the hub for filmmaking in Iran and you can find all the resources there. But I insisted on staying in Shiraz. I believe the city has potential and it was up to me to bring the people together. I also started with a very low budget. A chance meeting with writer, director and producer Majid Barzegar at a workshop in Shiraz and through him, Kaveh Farnam, a Dubai-based Iranian producer who owns a Czech film production company, Europe Media Nest, changed everything for Suzan.

Marketing is really my territory. As a producer, you have to understand who the decision-maker is. You like the story, but this is not your story Kaveh Farnam, Producer, Leakage

The stop-start nature of the shoot ended with the infusion of more money, and Suzan managed to complete the shoot with a crew of around 20 equipped with a Sony FS7 and a Blackmagic production camera, among other equipment.

Suzan describes Leakage as the exploration of manipulated realities within an uncertain geography and a vulnerable community. Outsiders often attribute the abundance of creative expression from Iran to censorship and other recent impositions such as the embargo. While they have had a telling impact on the kind of stories filmmakers such as Suzan and others can tell, the oblique method of telling a story has grown out of a culture defined by poetry that has always employed indirect language and double meanings to broach taboo subjects.

For Suzan, the film has been a long labour of love and her most uplifting moments were during production, especially when the protagonist played out her lines. She recalls: When the lead actress Armik Gharibian spoke as Foziye, I found myself lost in her world and her struggles.

Since 2009, Suzan has been involved in the production of shorts, and while money was missing as she embarked on the rather courageous journey to make a feature film in small-town Iran, she did not let her directorial instincts be ruled by the lack of money when she contacted Lebanese DoP Ramzi Hibri to travel to Shiraz to make the film, or when she cast a relative outsider to movie acting, Armik Gharibian, in the lead role.

Suzan explains: Armik has some theatre background but never in movies. She is a friend and when I was working on the script, I was imagining her in all my scenes  she has such unique qualities. She agreed readily and travelled from Tehran to Shiraz for the movie. I did a lot of acting rehearsals over two to three months with my cast, since my script was unusual and they had to get into the narrative. So when the actual shoot took place, they were thoroughly familiar with their roles.

With a growing reputation for supporting Iranian cinema and art for the past decade, Kaveh Farnam, has been financing independent filmmakers for the past five years, motivated by a missionary zeal to give the stories a celluloid platform. To the industry in the region, he is better known as the CEO of Advanced Media, one of the Middle Easts largest suppliers of broadcast, professional video and photography equipment and accessories. Farnams previous stint, a co-production with Iranian Director Mohammad Rasoulof, won the main award in the Cannes Film Festivals Un Certain Regard category.

Money and the professional help from the producers brought about a sea change in the making of Leakage. Suzan recalls: Until I found Majid and then Kaveh, I was doing everything from planning logistics to renting equipment to looking for cast and crew. Finding good producers before you start is key, because he or she will help you from the very first moment. Everything was easier with Majid doing a bit of the post-production, Kaveh helping with logistics, marketing and so on.

The script of Leakage, addressing the realities of our life, appealed to me immediately, says Kaveh Farnam, the affable producer of the movie. Speaking to BroadcastPro ME in his office in Dubai, he acknowledges that beyond the initial treatment and story-boarding, he had a long-distance relationship with the production process in Shiraz.

I did a lot of acting rehearsals over two to three months with my cast, since my script was unusual and they had to get into the narrative Suzan Iravanian, Writer-Director

Throwing light on his role as producer for Leakage and his general filmmaking philosophy, Farnam says: As a producer, I try not to get involved in daily activities. I believe the DoP knows better and should be given the freedom to operate. As for the production set, the director is the boss and you have to respect him or her. I prefer to be involved in the development stage, help with treatment and when it comes to shooting, I help with logistics. I also like to see the rushes before editing, and when the film is completed, I get involved with music or visual effects if required.

Marketing is really my territory. As a producer, you have to understand who the decision-maker is. You like the story, but this is not your story.

Leakage will probably have a better run than most first-time feature films by virtually unknown writer-directors, largely because of Farnams experience gained over five years in the film festival circuit. He adds: The unique Works in Progress category allowed us to screen the film without losing the chance for a premiere in a big festival. Moreover, you get to interact with agents and distributors at an early stage. Once your film has had a premiere in a grade-A or maximum grade-B festival, you receive a lot of invitations from film festivals with screening fees. If you travel to 20 to 30 festivals with screening fees ranging from $500 to $1,000, you are ensured a substantial return.

While Farnam is devising a unique approach to having Suzan and her debut feature noticed by important festivals such as Sundance and the Toronto Film Festival, he also hopes the film will find traction in Iran. The process in Iran begins with submission of the script for approval, and the film is currently undergoing the permit phase for release, according to Suzan. However, the approval of the authorities will not be enough, as the producers will have to negotiate with cinema owners for theatrical release and with local municipalities for the right to advertise the film. While a premiere at an important festival is the dream for most independent filmmakers, for Iranian filmmakers, an international premiere needs approval from the country’s film authorities. As one filmmaker ruefully states: We make films for the wardrobe  we finish it and put it in the wardrobe.

The long-running embargo has also had an impact, with film markets in the region not having as many screenings for Iranian films. Similarly, the likes of Netflix and Amazon have been more forthcoming to host co-productions, such as between Iran and Afghanistan, than standalone films from Iran.

While it all seems a hopeless cause for the average filmmaker who has not achieved the revered status of two-time Oscar winner Asghar Farhadi (A Separation, The Salesman), producers such as Farnam are vital for an independent film industry. We ask Farnam how he keeps going when it seems finding a platform to screen internationally or in Iran is a lot more challenging than the rigours of making a movie.

Readily admitting that his relatively recent stint as film producer is a lot more exciting than being on the sales floor or the exhibition floor at a broadcast event, he says: I love the process of creating a film from just an idea. Though I wasnt present at the shoot, Suzan and I would talk each night about the days shoot. I enjoy the process  sitting for eight to 10 hours in a dark room, experiencing the frames transform. As an aside, interacting with DoPs and filmmakers has helped me serve the industry better as a dealer in broadcast equipment. But more importantly, as an Iranian I believe these stories need to be told.

On what keeps him going, he says: Many of my friends who I respect a lot have given up after a while. There is a possibility that I will give up. Cinema has a rich history in Iran and even now, nearly 200 films are being made in a year. Some urge me to do commercial films, but there are enough who do that. I am keen to narrate a true slice of life from Iran. I am fortunate enough to have the resources to support the process.

Iran confirms three of its satellites have passed pre-launch tests