Satellites have the power to change the world

Along with CNN, other participating companies include the Special Olympic World Games Abu Dhabi 2019, MajidTV, Kids Unplugged and Toaster Productions. 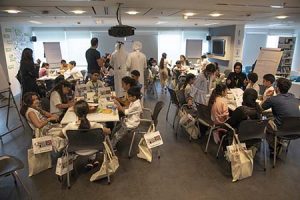 twofour54s Summer Camp in Abu Dhabi reportedly sold out within 24 hours of registration opening. The annual camp introduces children aged nine to 12 years old to an array of media, allowing them to explore the skills needed for a career in the creative industries.

The third edition of the annual programme has new sessions presented by the Abu Dhabi Youth Council, the Special Olympic World Games Abu Dhabi 2019, MajidTV, Kids Unplugged, and Toaster Productions. It also includes the return of some of the most interactive sessions from earlier editions presented by twofour54 partners such as CNN, and the Korean Culture Centre.

Children attending will have exclusive access to some of the industrys leading talent, such as CNN Abu Dhabis Managing Director Becky Anderson. They will be taken on a tour of the broadcasters studios and try their hand at reporting the news themselves. In another session, they will meet the team behind popular childrens show Iftah Ya Simsim  and even have the opportunity to appear on camera with the characters.

Commenting on the vision behind the summer camp, H.E. Maryam Eid AlMheiri, CEO of Media Zone Authority  Abu Dhabi and twofour54, said: Developing local young talent is one of our top priorities as we build a sustainable media sector in Abu Dhabi. The future is literally in their hands.

The summer camp is an example of how we are doing this, along with other initiatives such as internships and our creative lab community. The work we do with youth is changing perceptions of the industry in many ways by showing the wide range of opportunities that exist within media. It is also important that we educate our youth on the role media plays in preserving our culture and identity, and ensure they have the right skills to be a part of this mission in the future.

The twofour54 Summer Camp is bilingual and integrates a mix of learning and entertainment using interactive sessions within various media-related disciplines. The sessions are run by twofour54 staff, partners and creative lab members.

Children attending the summer camp will have the opportunity to work with creative lab talent, with the prospect of joining twofour54s 13,000-strong youth community in the future. The lab offers the chance to volunteer on live projects, gain experience while working with industry experts, and learn from twofour54 partners via workshops, projects and competitions.

The summer camp has reportedly proven so popular that twofour54 is looking at holding a second camp later in the year.