EVS will be presenting the latest in live production technology including the MENA region debut of its X-One unified production system. 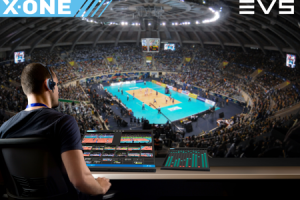 At CABSAT 2018, EVS will be presenting the latest in live production technology including the MENA region debut of its X-One unified production system. CABSAT will take place at the Dubai World Trade Centre between 14-16 January.

X-One puts the capabilities of a control room in the hands of just one operator, the company claims. Suited for smaller scale productions of up to six cameras, users benefit from a contextualised touchscreen user interface which adapts to the type of production on which its deployed. Recently awarded the IABMs Peter Wayne Award, X-One enables a single operator to create replays, control audio, cut together a live feed and even add graphics to live programming.

EVS will also demonstrate other live production tools, including its DYVI software-defined switcher and the XT4K live production server. DYVI is based on IP-centric software fabric that allows its users to add contextual features  effects and layers that are no longer tied to hardware  and to scale up or down processing as they see fit. The switchers capacity can be extended by simply adding extra panels and GPU enabled processing modules.

The XT4K is EVS answer to a growing demand for 4K live productions as it comes with four UHD-4K flexible I/O channels and up to 12 HD/1080p channels. The latest generation server also offers native support of 10bit codecs for HDR productions as well as the SMPTE 2110 IP standard.

EVS S-Core Master will also be showcased demonstrating to engineers how theyre able to benefit from visibility of all sources and end points within an IP-connected network. The EVS IP routing system acts as an infrastructures central orchestrator and uses SDN control methods to manage the flow of media and guarantee the right amount of bandwidth throughout the infrastructure.

EVS to debut multi-camera positioning and framing system at IBC2019

EVS to debut multi-camera positioning and framing system at IBC2019