New board of UAESA meets to discuss forthcoming projects

New board of UAESA meets to discuss forthcoming projects

The members noted the legislative and regulatory frameworks covering the national space sector, the projects and initiatives to develop advanced technical capacities, as well as the launch of various space research centers 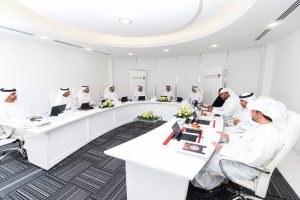 The new members praised the diligent efforts and successes of the previous Board over the past three years, during its period under the chairmanship of H.E. Dr. Khalifa Al Romaithi. In particular, the Board highlighted the establishment of the Space Agency and its subsequent international recognition within the global space sector, including appreciation from leading international organisations and bodies. In addition, members noted the legislative and regulatory frameworks covering the national space sector, the projects and initiatives to develop advanced technical capacities, as well as the launch of various space research centers.

The Board reviewed the Agency?s forthcoming projects and programs aimed at organizing the sector, with a focus on educational activities. Board members also discussed the latest developments related to the National Space Law and the National Space Strategy, which are currently being finalized. Finally, departmental reports were reviewed, providing an overview of the results and achievements of initiatives implemented and future proposals, as well as summaries of administrative mechanisms and hierarchies.

H.E. Dr. Al Falasi noted that, in accordance with the strategic plan, the Space Agency will continue to build on the achievements made throughout the national space sector in recent years. He also said that the Agency is uniquely positioned to positively reflect the UAE?s international image by highlighting the global successes of ambitious Emirati youths in the field of space.

The Space Agency Chairman also highlighted that Emiratis with advanced skillsets will play a major role in building on the space sector?s existing achievements and guaranteeing its continued progression. He stated that the human factor is crucial to ensuring that the national space program meets its objectives and launches new projects that will secure the UAE?s leading position in the international space sector. In this regard, H.E. Dr. Al Falasi stressed the government?s focus on capacity building and development within the sector.