Viacom to launch Paramount+ in March

SpaceX set to complete the first Starlink launch of 2021

The ASBU BroadcastPro 2020 Awards shortlist is out

The MoU was part of an official visit to Abu Dhabi by a high-level delegation from Luxembourg, headed by HRH Prince Guillaume, Crown Prince of Luxembourg 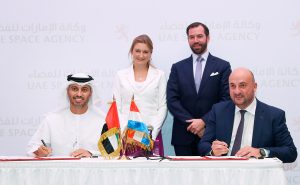 The UAE Space Agency has signed a Memorandum of Understanding (MoU) with the Government of the Grand Duchy of Luxembourg, defining a framework for collaboration and the exchange of information and expertise in the fields of space science, research, and technology.

The MoU was signed at by H.E. Dr. Ahmad Belhoul Al Falasi, Minister of State for Higher Education and Chairman of the UAE Space Agency, and H.E. Etienne Schneider, Deputy Prime Minister, Minister of the Economy, Internal Security and Defence of the Grand Duchy of Luxembourg.

The MoU promotes cooperation in various aspects of space exploration, including space science, research, technology, remote sensing, and navigation. In addition to this, the MoU encourages collaboration on space policy, law, regulation, and personnel training for space activities.

H.E. Dr. Ahmad bin Abdulla Humaid Belhoul Al Falasi, Minister of State for Higher Education and Chairman of the Board of Directors of the UAE Space Agency said: ?Our agreement with the Government of the Grand Duchy Luxembourg falls within the strategic visions of both the Space Agency and the UAE. This includes working towards closer international cooperation, establishing mutually beneficial international partnerships and exchanging scientific knowledge with the rest of the world.?

?The UAE Space Agency recognizes the importance of international collaboration in the field of peaceful exploitation of outer space, as this field is considered part of humankind?s common heritage. It is extremely important in our view for all competent entities in this field to work together towards the common goal of enhancing the welfare of humanity,” added H.E. Al Falasi.

Luxembourg?s Deputy Prime Minister and Minister of the Economy Etienne Schneider declared: ?Luxembourg is promoting actively the peaceful exploration and the sustainable utilization of space resources for the benefit of humankind. In line with those goals, the Grand-Duchy encourages discussions on space resources exploration and utilization in all relevant international fora. By signing this MoU with the UAE Space Agency, we continue to endorse cooperation at bilateral and multilateral levels in order to progress together with other nations on a future governance scheme and a global regulatory framework for space resources utilization.?

H.E. Dr. Eng. Mohammed Nasser Al Ahbabi, Director-General of the UAE Space Agency said: ?The United Arab Emirates and the Grand Duchy of Luxembourg enjoy great partnerships across many areas including the exploration of space, and we are certain that the signing of this MoU will strengthen cooperation in space sciences, research, technology and services, as well as the existing strong relations between the two countries.?