Disguise to debut at NAB with extended reality toolkit

Netflix teams up Vishal Bhardwaj and Tabu for ‘Khufiya’

Disguise to debut at NAB with extended reality toolkit

Disguise will offer a preview of how the xR platform improves several aspects for Film and TV production, including talent immersion, interaction with CG elements, real lighting information on actors and real objects. 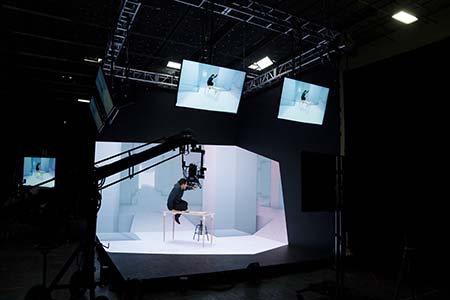 Disguise will make its debut at NAB alongside WorldStage, and ROE to showcase a preview of the latest in the disguise production toolkit, Extended Reality (xR), which empowers production teams to deliver augmented and mixed reality within studio environments.

On the booth the teams will be running demonstrations, showing a preview of how the xR platform improves several aspects for Film and TV production, including talent immersion, interaction with CG elements, real lighting information on actors and real objects.

Speaking about their participation, Ash Nehru, Founder and Chief Innovation Officer at Disguise, said: Disguises xR platform is still in development, alongside a beta development group, and features for both AR and MR will continue to be released throughout 2019. At Disguise, our goal is to work closely with successful and visionary practitioners to help develop the next generation of immersive experiences. Were coming from the live entertainment industry, which gives us a fresh approach to the challenges of the broadcast environment. We’re excited by the creative potential of xR and can’t wait to get these tools into the hands of experienced industry professionals.

The xR demos will feature stYpe camera tracking, feeding positional data into the disguise platform, allowing content on LED walls or projection elements on multiple production stages, to be generated to the cameras perspective. Combined with live and interactive studio graphics the Notch real-time content engine integrated with disguise will show how live generative content can be used as a video source to create scalable content in real-time which can react to the environment and studio lighting. disguise will be adding more real time engines plus support for further camera tracking technologies, as the development phase progresses.

Matt Ward, Chief Technologist at WorldStage, added: This is a natural evolution for WorldStage. Blending physical and digital spaces is not new, but the disguise xR workflow allows WorldStage to integrate all the tools required to execute these projects in a way our clients already understand. Were very excited to be part of the beta development group with disguise and to help breathe life into it at NAB.

How do we make pay TV commercially viable?

How do we make pay TV commercially viable?