Mobily to participate as leading digital partner in LEAP 2023

by Guest Columnist
in Reviews
ShareTweetPostEmail

For on-the-move reporting or television production, or both, Tim Orr, DoP at Dubai-based Nomad Productions, offers his verdict on the Sony Z90V 4K HDR camcorder. 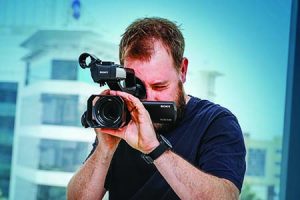 For on-the-move reporting or television production, or both, Tim Orr, DoP at Dubai-based Nomad Productions, offers his verdict on the Sony Z90V 4K HDR camcorder.

Sony has released a potentially game-changing compact 4K camcorder that is equally suitable for broadcast news, corporate events and even television production. The PXW-Z90V 4K HDR camcorder boasts many of the features found on more advanced models in the Sony XDCAM range, including the PXW-FS5 and PXWFS7, but at a fraction of the cost.

I recently had the pleasure of testing this little powerhouse of a camcorder here in Dubai, and was more than pleasantly surprised. On the outside, it looks almost identical to its popular predecessor, the PXW-X70, but on the inside, and straight out of the box, the PXW-Z90V is a major improvement.

For the price and quality, there are plenty of professional camera operators who wouldnt think twice about using this as an A or B camera on a variety of jobs Tim Orr, DoP, Nomad Productions

The PXW-Z90V is the first camcorder to feature a one-inch EXMOR RS CMOS stacked sensor with improved autofocus performance and 4K HDR recording. The stacked element of the sensor is designed to minimise rolling shutter and can also help reduce noise levels. The sensor is not as big as the super 35mm sensor found on the FS7 and FS5, but for a camera of this size, it works well and allows you to achieve a reasonably shallow depth of field using a large aperture, combined with the very useful three-stage built-in ND filters.

The Zeiss T* lens with 12x optical zoom runs from the equivalent of 29mm to 348mm with a maximum aperture of f2.8, closing to f4.0 towards the telephoto end. Its an impressively versatile ENG-style lens thats great for run-and-gun shooting, particularly in news and documentary filmmaking. On top of that, it also incorporates Sonys Fast Hybrid AF autofocus system, which gives the camera, quick and accurate focusing and tracking. This is specially useful when filming moving subjects. 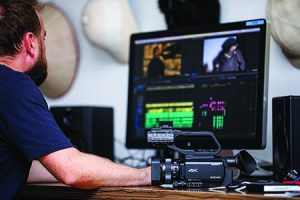 In fact, the PXW-Z90s autofocus abilities go way beyond that, with multiple modes including the useful Flexible Spot. This mode automatically identifies human faces and moving objects, and can even be set by touching the specific point of interest on the screen. A green box will appear around the selected area and will then track the person or object as it, or the camera, moves. You can also use this mode to do automated focus pulls by selecting the two points on the screen that you want to pull focus from and to. It actually works incredibly well, to the point that the user will be able to produce very steady focus pulls, especially when zoomed in for tighter shots.

For the professional user, the camera also features multiple gamma settings, including Rec.709, Slog2 and Slog3, with various colour spaces making it easier to match with other cameras during post-production. It also features a Gamma Display Assist option so that the user or client can see roughly what the final shot will look like on the screen. This also means the PXW-Z90 could very easily be used with a variety of other cameras on a single shoot without having to worry about the images not matching well in the final edit.

The Z90 can simultaneously record 4K footage and a 720p proxy in-camera, which means the user doesnt have to spend time down sampling the 4K files Tim Orr, DoP, Nomad Productions

Slow motion is definitely in vogue and has been for some time, not least because it can make almost any image look awesome. The PXW-Z90 is no exception, with the capability of shooting up to that contains two XLR inputs with audio control buttons for both channels. The handle connects via a hot-shoe and can be removed at any time to make it easier to pack, or when you need to use any other top-mounted device. One of the other useful features of the Z90 is the connectivity. The WiFi connection is complemented by the Sony XDCam viewing and control app. The app was very easy to download onto my iPhone and then fairly straightforward to connect to the Z90.

Once connected, you can use your phone as a remote monitor with simple camera controls such as gain and record. This is actually incredibly useful for keeping an eye on a second camera from afar, or for video journalists using one camera and doing an interview themselves. You can even use the app to synchronise multiple cameras time codes over WiFi.

Even more useful for ENG crew journalists, the Z90 also has the ability to send live images for viewing at remote locations via 120 frames per second (fps) in full HD (1080p) at XAVC 10-bit 4:2:2, placing it on a par with far more expensive cameras. However, this little box of tricks goes even further, recording up to 1000fps, albeit with a reduction in image quality and batch recording. 1000fps is more of a gimmick than anything else, as its very rare that you would use it unless you were filming something very fast-moving, like a falcon or a Formula 1 race. Having said that, the quality of the slo-mo up to around 250fps is impressive.

When it comes to audio, the camera comes with an in-built stereo microphone, but more importantly, a detachable top handle a stream, or to send proxy files to an FTP server or to the cloud via XDCAM Air. I didnt have the chance to test these functions, and I assume you would need a decent internet connection, but if it works well then it could be a game changer for news crews in the field by allowing much faster turnaround from camera to edit.

Speaking of editing, I want to quickly touch upon the best workflow when using 4K footage. Its relevant because this is a 4K camera, and while people jump at the chance to shoot in 4K, a lot of them dont realise how it will affect post-production time. In simple terms, 4K is four times the resolution of HD or 1080p. This means that when you shoot in 4K, you are recording four times the amount of data. So when you import this footage into your editing platform, you may run into problems with processing speeds.

Fortunately, there is a solution to this  using proxy files. A proxy file is essentially an identical copy of your original footage file but in a lower resolution. Brilliantly, the Z90 can simultaneously record full-res footage and a 720p proxy in-camera, which means the user doesnt have to spend time down sampling the 4K files. At Nomad, we use Adobes Premier Pro editing software, which allows us to use the lower resolution proxy files to undergo what used to be known as an offline edit first, to save time. Once the client has signed off on the film which has been edited at 720p resolution, you can then automatically use Premier Pro to re-link the edit to the original 4K media. The client is happy, and youve avoided pulling your hair out over a computer that wont play back properly.

In conclusion, I have to say I enjoyed using the Sony PXW-Z90. There are a few minor quibbles regarding ergonomics, but overall the camera is a joy to use. As far as camcorders go, I dont think there is anything on the market to rival it, and for the price and quality, there are plenty of professional camera operators who wouldnt think twice about using this as an A or B camera on a variety of jobs. Although I havent done any technical tests, the picture quality on the Z90 is superb, largely thanks to the impressive one-inch CMOS sensor.

Google, Sony, Lawo, Blackmagic and others return to IBC 2022

Google, Sony, Lawo, Blackmagic and others return to IBC 2022